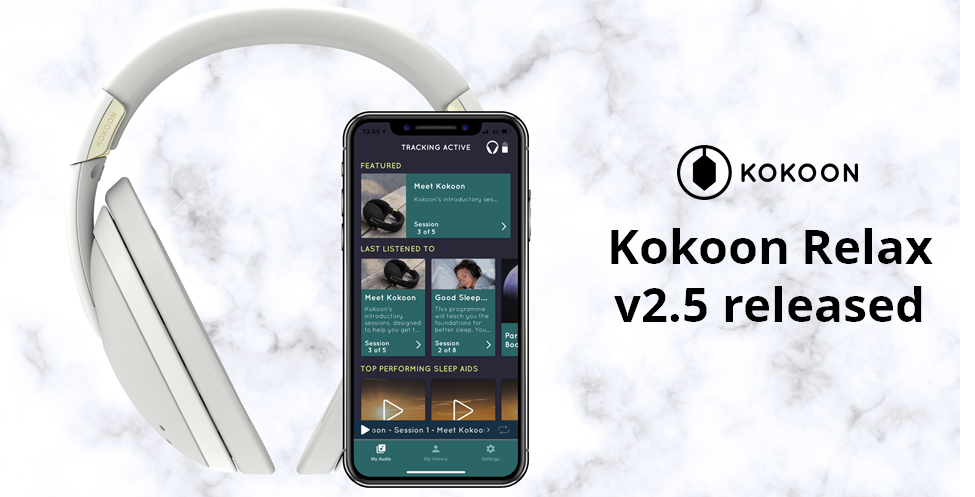 We’re pleased to announce that Version 2.5 of the Kokoon Relax app has now been released to the iOS App store and the Google Play store. We’ve been listening to your feedback and made several changes to how the headphones and app behave in response.

V2.5 is a big update and delivers a new version of headphone firmware, enables new features, and fixes multiple bugs and issues.

Importantly, this new version of the app and firmware puts in place the functionality required for the first phase of detailed sleep tracking. This will be deployed in v2.6 of the app. We have been working on v2.6 in parallel with v2.5 and it’s almost ready. We have further testing to do but plan to release around the end of May or early June. We will update you again on progress ahead of this release.

Read on below for more detail on the changes, but in summary:

V2.5 of the Kokoon app enables the firmware in your headphones to be updated via the Bluetooth connection, and includes our first update to this firmware. To update the firmware, follow these instructions:

1.Download the v2.5 update from the App store or Play store (Please note: your phone may have already automatically downloaded and updated the app for you).

2. Ensure your headphones are fully charged.

3. When you load the app and have headphones connected you will receive a notification:

Please note, if your battery on the headphones is not fully charged, you will be asked to charge your pair.

4. Start the update. This process takes around 10 minutes to complete. Do not move your headphones away from your phone. If the process gets interrupted, closing the app and turning off the headphones before restarting should resume the update.

5. Once complete, you can dismiss the message and turn your headphones back on to reconnect. Your headphone firmware is now updated!

The new firmware has enabled “Auto power off”. When the headphones detect you have taken them off your head, they are now able to turn themselves off after 15 minutes.

This allows you to save your headphone battery when they’re not on your head. This feature will be enabled by default, but you can turn it on and off by opening the settings menu and the “When I Take Off My Headphones” section, where you’ll find a new option for auto power off.

We’ve also included pop up messages to let you know when your headphones have been turned off automatically.

This is a new feature! We’d love to hear any feedback about how you find it performs and we will improve it over time.

We have addressed the issue of audio distortion at high volumes that some customers have experienced. This was caused by our headphones essentially being configured to be “too loud” at the firmware level, causing distortion and some other issues. You should now find that you can listen at a range of volumes distortion free.

You will also find that you can adjust your headphones volume at low volumes more precisely. We had some customers tell us that increasing the volume by one click/bar took it from being “too quiet” to “too loud”. This is a problem if you’re trying to relax! This update should solve this issue.

As mentioned, work on v2.6 is nearly complete and we expect to be releasing it in the coming weeks. This will enable the first phase of detailed sleep tracking when wearing the headphones through the night.

Our team are working hard at the release of multiple new features and functionalities coming soon to the Kokoon Relax app. These include: