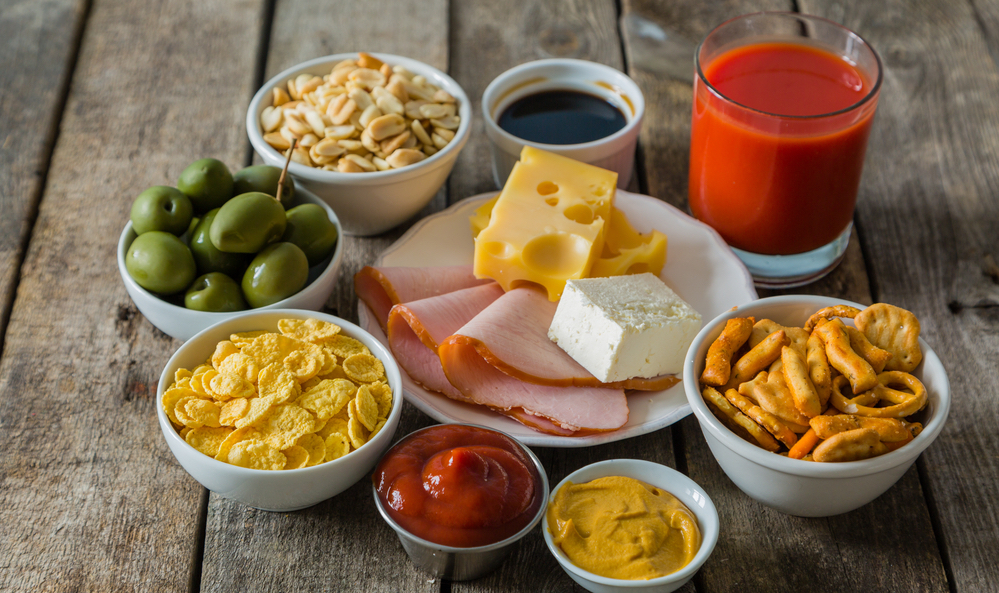 There is no worse feeling when trying to get to sleep than being bloated and uncomfortable. There are some foods which contribute to bloating, and should be avoided, especially before bed time and some foods which will help to keep bloating at bay. While everyone has their own particular sensitivities and may find certain foods more or less troublesome than others, these foods represent some of the worst offenders for causing bloating. We’ve also included a couple of natural bloating remedies.

Whilst a little salt in your diet is perfectly fine, overly salted foods can lead your body to retain water. This in turn will leave you feeling boated. Be careful not to over salt your food, and be particularly wary of pre-prepared/ready meals, which tend to have a high salt content. Bloating is not the only negative side effect of a high salt diet, and is indeed the lesser concern. The sodium in salt, in large quantities, can lead to high blood pressure, putting strain on the kidneys and heart, among other vital organs.

If you happen to over indulge in salty foods, it’s best to drink plenty of water to help flush it through. Also, eat foods which are high in potassium, as they will help to regulate your sodium levels. Try bananas, avocados, kiwis or oranges.

Legumes come in many forms; all beans (including soybeans), lentils, peas and pulses are all part of this group. They are high in protein and other nutrients, and often form a key part of healthy vegetarian and vegan diets. However, they can also cause bloating and discomfort. Once the proteins have been absorbed, the remaining sugars and fibres contained in the legume cause bloating as your intestinal bacteria attempts to break it down, making legumes a FODMAP. FODMAP is an acronym used to describe foods with short chain carbohydrates which are poorly absorbed in the small intestine.

This should not put you off eating legumes as they are a healthy source of vitamins and protein. The best way to fight bloating caused by legumes is getting your body used to them by regularly adding them into your diet. Over time your body will become accustomed to digesting legumes and the bloating effect will be less noticeable.

Dried fruit is a healthy, quick snack and a perfect alternative to crisps and sweets. Too much of it however can leave you feeling bloated. The high fructose levels in dried fruits can be difficult to digest, particularly for sensitive stomachs. As the stomach struggles to digest the fruit, it can start to ferment, which is the cause of that bloated feeling. For a healthy snack alternative, try eating a handful of nuts or other fruits such as blueberries.

Cruciferous vegetables include broccoli, cauliflower, cabbage and kale, among others. This is another nutritious group which unfortunately also contributes to bloating. As with legumes, they are FODMAPs. To continue eating these vegetables, make sure to cook them first rather than eating them raw, as this should reduce the bloating effect.

When you do suffer from bloating, there are a few natural remedies which may be able to help.

Peppermint is a great natural way to reduce bloating. It works to improve digestion and relax your GI muscles. Try drinking a cup of peppermint tea after dinner to make sure you don’t bloat. If you don’t have peppermint to hand, chamomile can also be used as an alternative.

Another tea which you can add to the after dinner selection is ginger tea. Ginger is a highly effective digestion aid, soothing the digestive muscles and acts as an anti-inflammatory.